Guess What Interaction Has the Highest Sales Impact 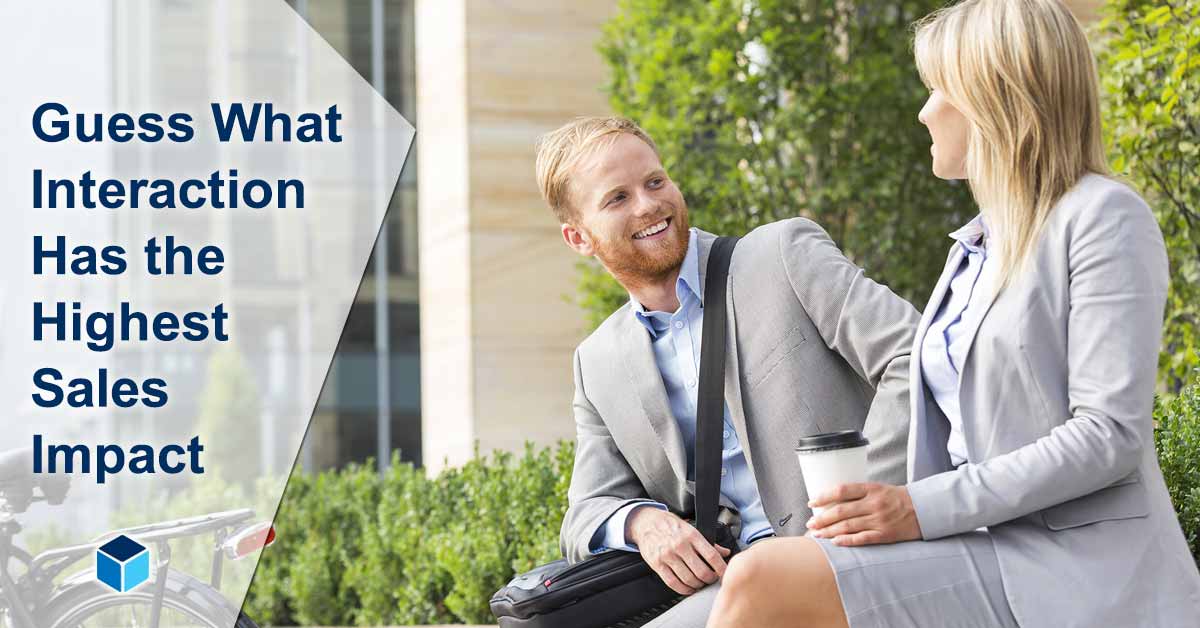 Meeting somebody in person requires time, energy and resources. Obviously, technology has made it easier for us to communicate and exchange information at lightning speed, however, when it comes to closing deals, nothing beats Face-to-Face (F2F). To this day, F2F has the highest sales impact.

Mobile phones are omnipresent. People are better connected than ever and yet, many feel isolated and complain about the lack of “real” human connection.

Before the mobile revolution, people used to chat way more on trams, buses and trains. Today, everybody is heads down, scrolling through several feeds, constantly switching between apps while listening to music or podcasts.

Where is our attention?

It looks like it’s everywhere (inside our mobile phones) and nowhere at the same time.

We take a photo and immediately post it on Instagram waiting for our followers to like it. We connect with grandma on Facebook and send her a new pumpkin pie recipe because nobody beats grandma’s cooking and baking style.

We go through a couple of YouTube videos while we listen to XYZ’s latest song release. We rush to work, buy groceries on our way back home, do the laundry and call Mom as she had something important to tell us. All this while continuing the social frenzies.

No wonder we are exhausted.

No wonder we are disconnected with ourselves and feel lonely.

No wonder time is flying, the years are passing and we are still trying to make sense of everything.

While the vast majority of people on this planet (mostly western hemisphere) run their lives in this way, it has become quite easy for sophisticated marketers and sales people to harness the power of mobile and social media to capture and monetize attention.

It all comes down to understanding patterns.

The better you understand patterns, the better you can target your audience, hook them with the right message, show them the right products/ services and ultimately, make the sale.

While all of the above works great if you know what you are doing and have proper marketing systems in place, there is one type of interaction that trumps all other methods combined and has the most powerful sales impact.

Beat This! F2F Has the Highest Sales Impact

Why do the wealthiest people on this planet meet in person and close deals behind doors? Why does the Elite hang out in Davos, Switzerland at the World Economic Forum (WEF) or at the Bilderberg conference?

They do so because they understand the power of Face-to-Face.

Big decisions that impact the entire world aren’t discussed over the phone or communicated in a WhatsApp chat group.

Some of the wealthiest business tycoons who have never been mentioned in any Forbes list (and never will) are selling face-to-face and closing deals in person.

Obviously, the phone and social media are carefully used to communicate but the vast part of the interaction happens F2F.

If this is the #1 marketing and sales vehicle deployed successfully for centuries by the Elite and proven to have a high sales impact, why aren’t ‘normal’ folks using it more consistently and more often? Why isn’t F2F an integrated part of every marketing and sales process?

There is nothing wrong with using the new media (e.g. voice, AI, VR, podcasts, videos, social media, apps etc.) to onboard leads and increase conversions.

What is wrong though is not mixing offline and online channels, and more importantly, disregarding and disrespecting highly impactful methods such as F2F because they are less trendy and “uncool”.

I’m a huge fan of integration because I’ve experienced tremendous success with this approach for almost three decades now.

The more we immerse ourselves into tech, the higher the need for human interconnection. It’s not an either or decision to be made. And there’s no debate about right or wrong from a non-judgmental position. It’s about being smart and mixing tech and the human spirit to achieve what it is that we want while providing an outstanding customer experience.

What strategies do you deploy to increase your sales impact?