A Very Happy, Prosperous, Joyful and Successful New Year! How did your New Year’s celebration go? Did you watch the traditional New Year’s Concert from Vienna yesterday?

The annual New Year’s Concert of the Vienna Philharmonic (German: Das Neujahrskonzert der Wiener Philharmoniker) is a traditional concert of classical music, comprised of Strauss waltzes, polkas and marches. This amazing event takes place each year in the morning of January 1st in Vienna, Austria and is broadcast around the world to an estimated audience of 50 million (in 2012) in over 90 countries.

This year, the 74th annual New Year’s Concert took place under the baton of Daniel Barenboim in the Golden Hall of the Musikverein. The Vienna Philarmonic commemorated the 100th anniversary of the outbreak of World War I and decided to invite peace activist Daniel Barenboim to conduct the concert.

Before we move on and discuss the first major social media marketing initiative of the Vienna New Year’s Concert, let’s have a listen to the last piece that was played. It’s the famous Radetzky March.

During the concert, the Vienna Philharmonic always sends New Year’s Greetings to the millions of people around the globe watching the concert on television. This year however, the organizers decided to enhance their marketing with a more comprehensive approach. They reached out to social media fans worldwide – especially those on Twitter – with the following Tweet: 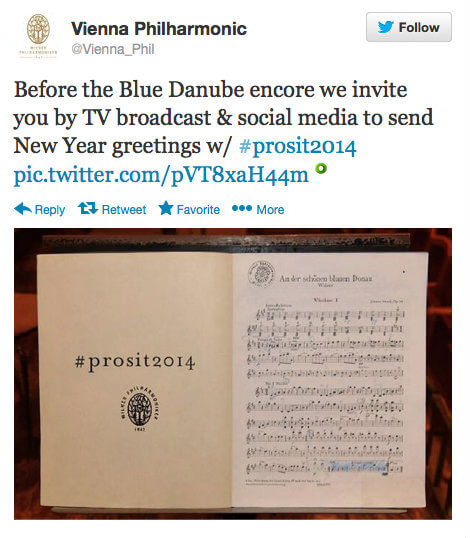 Now, even those who didn’t watch the concert or have no idea what this concert is all about had the possibility to reach out to friends and family across borders and time zones and wish each other a happy and prosperous 2014 by using the hashtag #prosit2014.

It seems the Vienna Philharmonic finally understood the incredible power of digital media and social networks thus trying to activate Twitter and Instagram with this marketing initiative. So far, the Philharmonic from Austria has only been active on Facebook.

If you want to reach out to a broader audience, if you want to keep up with the ‘new world’ and attract younger generations towards classical music from Strauss & Co., you definitely need to engage into social media marketing.

I congratulate the marketing team at the Vienna Philharmonic for this initiative and I very much hope they keep adding further online and social media strategies to marketing this fantastic New Year’s Concert in the future.

What online marketing strategies would you implement if you were a member of the Vienna Philharmonic marketing team? How would you boost the reach of the New Year’s Concert? I’d love to hear your thoughts on this.