The Truth About Word-Of-Mouth Marketing In The Digital Age 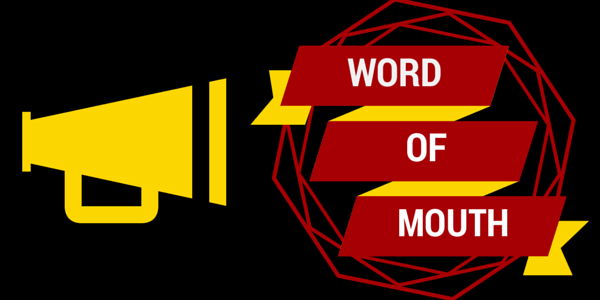 Why still bother with the old-fashioned channel of word-of-mouth marketing when you have Facebook, YouTube & Co.? Do most of the independent workers aka solopreneurs really get their gigs through social media? Nothing could be further from the truth.

In today’s digital world one might think that most independent workers get the vast majority of their assignments through Elance, oDesk, Freelancer.com and other online talent marketplaces. Quite the opposite is the case.

According to the “2014 State of Independence in America Report” from MBO Partners, good old word-of-mouth referrals are by far the most important source of work for solopreneur independents. Interestingly, it is even more pronounced for those making making $100k or more. 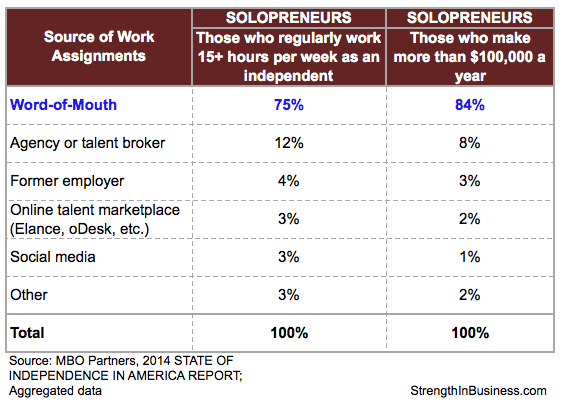 Do these results surprise you?

Have you expected more work being generated via social media?

While 35% of the independent workers use social media in their business, only 2% of them listed social media as their number one source of work. Social channels might not have a key importance on attracting assignments yet, nevertheless everybody agrees that they play a major role when it comes to increasing brand awareness and building a community (aka network).

Let’s dive deeper into MBO Partners‘ latest report and led some light on the subject.

3. Independent workers are an economic powerhouse. More than $1.1 trillion (with a T = TRILLION) was generated by solopreneurs in 2013. Furthermore, 38% of independents reported spending a total of $92 billion hiring other independents. This would be the equivalent of hiring 2.2 million full-time workers via contract hiring.

4. Independent work goes mainstream. By 2019, the number of independent workers in the US is expected to grow to 40 million: 24.5 million solopreneurs and 15.4 million side-giggers. The main reasons that drive this growth: flexibility, agility, lower employments costs, autonomy and career control, just to name a few.

There is so much going on across all industries (not just the one for independent workers). In the past, you could attend trade shows and meet key influencer or even pick up the phone and simply cold call them. Things have changed today. The industries have gotten a lot bigger and competition has become increasingly tough in this always-changing global economy.

The question therefore is:

How are you harnessing the amazing power of word-of-mouth marketing? I bet you got some of your past gigs by word-of-mouth, didn’t you?